Reading the Twilight saga for the second time makes me notice things I didn’t really notice before, or see the book inÂ  new light. Remember back to the first time I finished the Twilight saga? I was in pieces, because there was no more to read. Reading it for the second time isn’t quite as interesting, in some ways, as reading it the first time. I know what’s going to happen. That is what I am reading, and probably will be reading for the rest of my life, until some other vampire book comes out. 😉 Keep reading! Oh, yeah, and by the way, when Bella does research on vampires in the first book, Twilight, she finds a website called Vampires A-Z. I found that website! It’s real! It has all the info you read in the book, and more! It’s exactly the same website, word for word. This is the URL that with get you there: http://vampiresaz.webs.com/ It is cool to know that the site Bella was looking on is real!

Finally! The Snow ‘n’ Sports book in the Sports Shop is FINALLY being updated! Hooray! At the moment, it’s on May! Like, it’s almost September! Hello!

I am a fan of poofy skirts and dresses. Now, much to my joy, I have found a great website that teaches people to make a hoop skirt with a cheap budget! It is magnificent and simple. This is the URL: http://www.funkyhorror.com/hoopskirt.htm Anybody else who is a fan of poofy hoop skirts and wants to make one, should go to this website. It guaranteed to be helpful!

A cat. They are warm, fuzzy and will keep you company throughout the year. You don’t need to take them outside to pee and poo, like dogs. Plus, they’re just so CUUUUUUUUUUUUUTE! Take my word for it.

I’m pleased to announce that I am still alive after finishing the Twilight books. I have also found that my book topic at this point seems to be vampire romance. At the moment, I am reading a new vampire series called, “Vampire Academy”. I am currently on book 2. There are four published books in this series, and two more coming.These are the four completed books in the Vampire Academy series: Vampire Academy, Frostbite, Shadow Kiss, and Blood Promise. Only one of the two unfinished books is titled at this point, and it is called, “Spirit Bound”. You can go to the official website for Vampire Academy by Rishelle Mead, by google-ing “vampire academy books”. The first link should say…

…and that is the one you click. If it’s not the first one, scroll down, but remember the title above, so you don’t accidently click into something else.

Hoping for a Sequel to Breaking Dawn

I have just completed the last of the Twilight books, Breaking Dawn, and I want more! Stephanie Meyer has created a whole new world in her books (Twilight, New Moon, Eclipse, Breaking Dawn), and it felt so real when I was reading it. Now that I’m done, I feel weird. Like, while reading it, a fire was glowing inside me, but now that there’s nomore to read, I feel empty, only embers remain of my inner fire.

I’ve tried to read other books, to fill this hole in me, but it’s just not the same. When I read the other books, I’m always expecting (and hoping) Edward, or Bella, or someone from Twilight, to open the door and walk into the room, into this other book.

I could use these books to get away from the stress of reality, to escape from the dullness of only human life. I want to be able to do that again, with new, and more elaborate ambition.

I am well aware that I can read the books over again, but it’s just not the same, you know? I start Twilight over again, but I would know what happens. I would say, “Oh, I remeber. This chapter is their first kiss.” Big deal now, right? After reading Breaking Dawn, a mere kiss seems a tad dull.

I’m beggin’ you Stephanie Meyer! Write a sequel! Millions share my perspective on this matter!

Hi! If I may recommend a movie to people who like music, comedy (who doesn’t like comedy?), and trouble,Â  Mamma Mia! is a great movie about a girl named Sophie who is getting married to Sky. When Sophie, and her two best friends, Ali and Lisa, read Sophie’s mother’s old diary, the guest list pops up three more people.

Sophie thinks that she’ll know her dad right away when she sends invites to Harry Bright, Sam Carmichael, and Bill Anderson. She intends to keep them hidden from her mother until her wedding, but her mom, Donna, finds themÂ  without them knowing. Donna wants to keep them a secret from Sophie too, and results in a surprise for them all!

If you’re bored with the last month of summer, sit down with this movie, Mamma Mia! and you’ll be singing the rest of 09!

Is it summer vacation or the school year? It’s hard to tell. You know why? Well i don’t either, but I have a hunch. I think it’s because kids these days have only 2 MONTHS for vacation. Now, I’m not complaining, but does it really give kids enough time to be care free? Think about it.

School supplies. Does summer really give kids, and their parents enough time to buy school supplies? I know what you’re thinking: Who needs 2 months to get a couples pencils? Well consider this: in the summer, kids usually sleep half the day anyway. (Count how many hours you lose.) Then there’s your three-week visit to all your relatives. Plus about two days before and after, at the airport. Another week to get back to your home time. (You still counting?) So How many days does that leave? No really, I don’t know. I’ve always hated math. Especially hard math. So, comment, and leave me an answer. thanks!!

I tried to scream, but I couldn’t find my voice. It wouldn’t do any good anyway, since I had no friends on Mars, now. All of a sudden, my eyelids drooped. I couldn’t keep them open. Finally I gave in, and let myself drift into sleep. I must have slept for a long time, because I had so many dreams; all of which consisted of wacky figures, and out-of-shape letters. Except the second-last dream. I was floating down a river of orange juice, on a piece of toast. I was all sticky, and yellowish-white. Then I realized that I was butter scraped across the toast. I could hear a waterfall up ahead. I peeked over the edge of the toast, only to find a huge mouth waiting at the bottom! I closed my eyes. Now I was sweating with fear, and I was melting all over myself and the toast. Suddenly, I heard a metal clash, as if two people were having a duel with swords…or with cutlery….. I opened my eyes carefully, so that I wouldn’t get butter in my eyes, and sure enough, a fork, a knife and a spoon were hitting each other with the ends of themselves. This went on for a while, and I began to understand the plot. The spoon was trying to save me, while the knife, and the fork, were trying to cut me in half. I suspected they were working for the mouth. I felt a slight tap tap tap on my shoulder. I looked up, spilling butter into my frightened eyes. I peered through the butter. It was the spoon…and it was inviting me onto it’s handle. I tried to climb on, but I was stuck to the bread. I looked back and saw the knife and fork pinning me down where my feet would be.

Tree And Seagull At Hawrelak Park 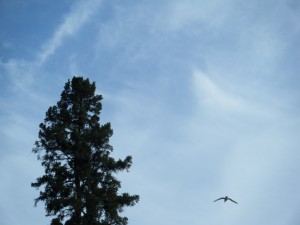 I was trying to get a good pic of a seagull and ended up with several pics of blank sky. Luckily, I got a few quality pics of seagulls and this is one of them.

Copyright © 2008-2022 The Average Writer's Desk All rights reserved.
This site is using the Desk Mess Mirrored theme, v2.5, from BuyNowShop.com.